This is making me crazy and quite frankly, I don't know where else to take it.
True Blood needs help, serious, serious help. And it has a whole host of books from which to pull, yet it opts not to do so. But Alan Ball, you are a talented and creative man, but dude, your writers suck. Your story lines suck. You are going to lose your audience and make True Blood go away.
It was bad enough when you devoted an entire season to Marianne, a character that is barely a blip in the books. But let's put that behind us and move on. Because that truly was unforgivable and I'm sure you must still feel shame when you think about that disaster.
Of course no one wants to watch the series as though it's a word-for-word play of the books. I get it. Lafayatte is a colorful character, it was smart to keep him instead of killing him off. I even can see why you have Tara on the show as Sookie needs a female friend in whom to confide. I think your decision to cast that particular actor as Tara was a crime against nature however and when she is on the screen must be watched with closed captioning and only one eye open. Perhaps we could have her killed off and reincarnated as a watchable actor without the grating voice and horrid faces?
And let's please leave Tara's mama dead where she belongs.
The whole Vampire League and King Bill and all--that's FINE. Wasn't in the books, but sure why not? It's interesting enough I suppose. But if I give you that plot line, you've got to sacrifice the Tommy/Sam plot. No one cares about Tommy. NO ONE. Put him and Joe Lee (Jolie?) and his mother in the ring and let them kill each other off. Cut your losses. Walk away. It's a waste of precious time. Alcide and Debbie are fine for now. The Jason story is grotesque and wrong. That is definitely one where you could have used a bit more book infusion.And let's dial down on the Jessica/Hoyt show. Jessica is cute, but let's put her more in the bit-player realm. And stop the nonsense with the fairies. There is a myriad of ways you could be going with that. Except for the one that you've chosen. It sucks. And Arlene--for the love of Pete-- she needs to be just the waitress at Merlotte's who says her goofy shite and that's that. A possessed baby? BORING. Because No One Cares.
Which brings me to the important part. You have a cult following with your casting of Eric. This season is supposed to be based on fan favorite Book Four. Yet the Eric/Sookie line has been downgraded to maybe 12 minutes per show. This entire season should be so heavily focused on that plot line that all other plots should be relegated to that lone 12 minutes. Every review is going nuts over Alexander whathisface's (let's just call him Eric) portrayal of a Ericless Eric. Let your actor fly, dude! Let he and Sookie play this out properly! And quit with the Marnie shit. She needs to stay hidden in the background where she belongs until the end.
Seriously dude, I can help you fix this mess. Call me.
Posted by Penny at 7:15 AM No comments:

"The opposite of take your child to work day is Thanksgiving."
Posted by Penny at 6:58 AM No comments:

So, I was in Boston a couple months ago(so, yes, that would be January. When there was 4+ feet of snow on the sidewalks.) and I noticed a trend we apparently don't have out here in the boonies. Which, quite frankly, I think makes us vastly superior because obviously WE know that leggings and tights and pantyhose are not pants. And no, these fashionistas weren't wearing thigh skimming shirts. They were wearing shirts that stopped at the waist. And then they pretended that tights or pantyhose or leggings were their pants. Yes, we saw many things we didn't need to see. And also...there was that whole snow issue. In addition to looking like you should be standing in a window with a red light on, were you not cold as all hell? I'm just saying.
And on the topic of fashion, I think Natalie Portman is beautiful, too. But let's stop pretending she looked good at the Oscars. Because she looked like a matronly old woman. Gwyenth Paltrow looked the best she's looked since she stopped being awesome and started being annoying. Also, Angelina Jolie in that sparkly green dress with the crazy shoulders looked like an alien. And not in a good way. That's all.
Posted by Penny at 9:31 AM No comments:

It would appear that the marketing world has sunk to a new low.
I saw a commercial for a diet plan for dogs. It looks like it's dog food, but it's in individual packages complete with an appropriate amount of treats for one day. So that you know how much to feed your dog. Because you can't look on the bag and scoop out the appropriate amount, or ask your vet how much you should be feeding your dog.
Overweight pets make me insane as it is, as do overweight children. Because we, as the ADULTS, are wholly responsible for what our children and pets are eating. Unless your dog/5 year old has a job, a bank account and some special car they can drive, you buy the groceries, you prepare the meals, you dish out the amount that goes on everyone's plate (and or dog bowl).
Although statistically, I have read that most parents of not only overweight, but clinically obese children do not feel their child is even remotely overweight. So maybe it's the same for dogs. "What? Their bellies are supposed to scrape the ground!"
Let's look at Stella for an example. Lately we've noticed that Stella is looking a little porky. Hmm, how could this be? We feed her the same amount of food every day; she is exercised every day. Why is she suddenly boasting a spare tire? (Well, save for the course of allergy medicine she's on that is making her crazed with hunger to the point that she's horking down frozen green beans,. But that's another story) Ah-ha! The culprit would seem to be that we had changed her brand of food. And yet we had continued giving her the same amount, not thinking that this food may require a smaller or larger amount for her size. So we adjusted the amount of food appropriately and she's back to being healthy. See how easy that is? And I didn't even have to spring for undoubtedly expensive individually packaged diet dog food to correct the problem. I just had to be responsible for checking to make sure what our animal pal was eating was the proper amount for a dog of her size and age.
Posted by Penny at 5:10 PM No comments:

I've gotten out of practice of having insomnia. Last night, however, it all came rushing back in one big sleepless mess. I tossed and turned before giving up and watching television until 1 am, only to re-awake at 3 and return to the couch before sleep took pity on me at 5.
Another snow day.
Mort needs a haircut.
I need to get the heck out of this house.
Posted by Penny at 8:24 AM No comments: 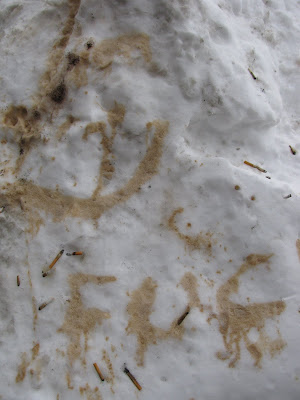 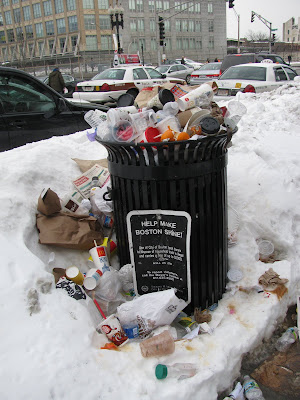 I hope you can really see the careful placement of all the cigarette butts dotting the snow like tiny jewels in the first photo. What do you think all those stains are? Coffee?
Dogs with bladder infections?
107 years ago when I was in school, we used to sit in front of the black and white television set that sported the only three channels available, waiting for that lucky stike of the clock that would have the announcement of school delays and closings. Our school district was pretty much always open, even when all those around us were closed. Occasionally, we may have had a one hour delay, but those were few and far between.
So I don't really understand why schools now close before the first flake of snow has hit the ground. I've heard it's because parents are so litigious, but that seems a little excessive. And I would imagine with the amount of parents who both work full-time, more people would prefer their children have school so that they don't lose a day of pay.
This boring and insipid little post is my attempt to get back into the swing of writing on a semi regular basis. Mazel tov.
Posted by Penny at 7:06 AM No comments:

Children really do watch what you do. For instance, perhaps you are always a wee bit befuddled and try to accomplish several things simultaneously and therefore never actually finish anything, but instead have many things halfway done. So, you just don't have much room left in your brain because you are never really in your brain in the moment. And so you make lists to try and stay on track. Lots and lots and lots of lists on scraps of paper everywhere. To-do lists. Grocery shopping lists. Dinner idea lists. Books to read lists. Things to look-up lists.
And then it should come as no surprise when your son presents to you, as though you are a twosome scheduled in a business meeting, his notebook filled with his agenda for the next week: the errands we have to run per my declarations, the play dates we have scheduled, the visitors we have coming ...
Posted by Penny at 10:34 AM No comments: